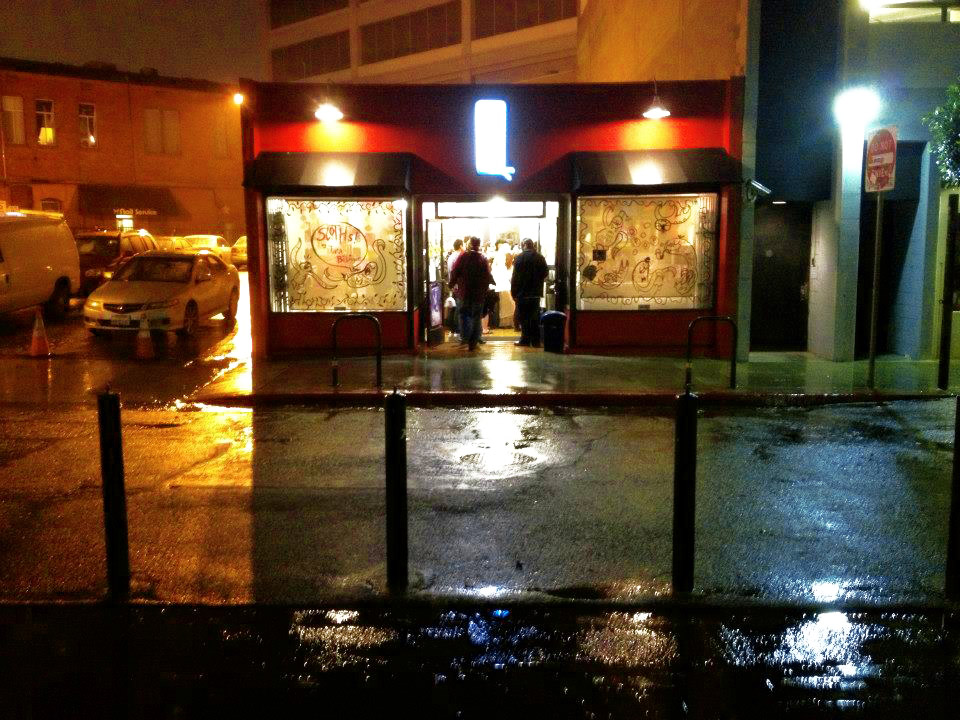 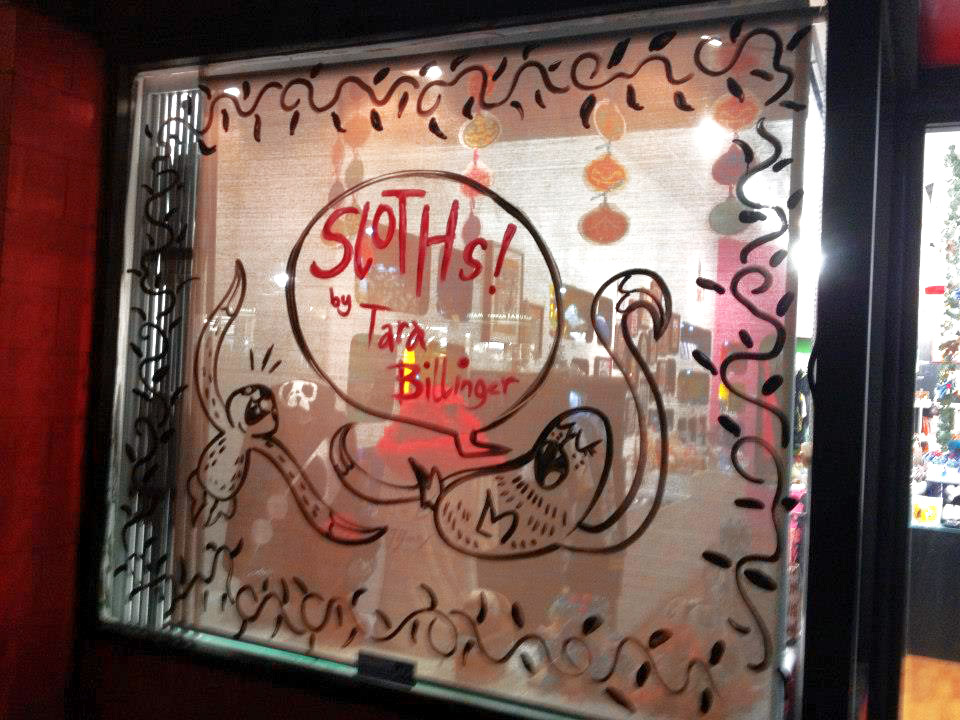 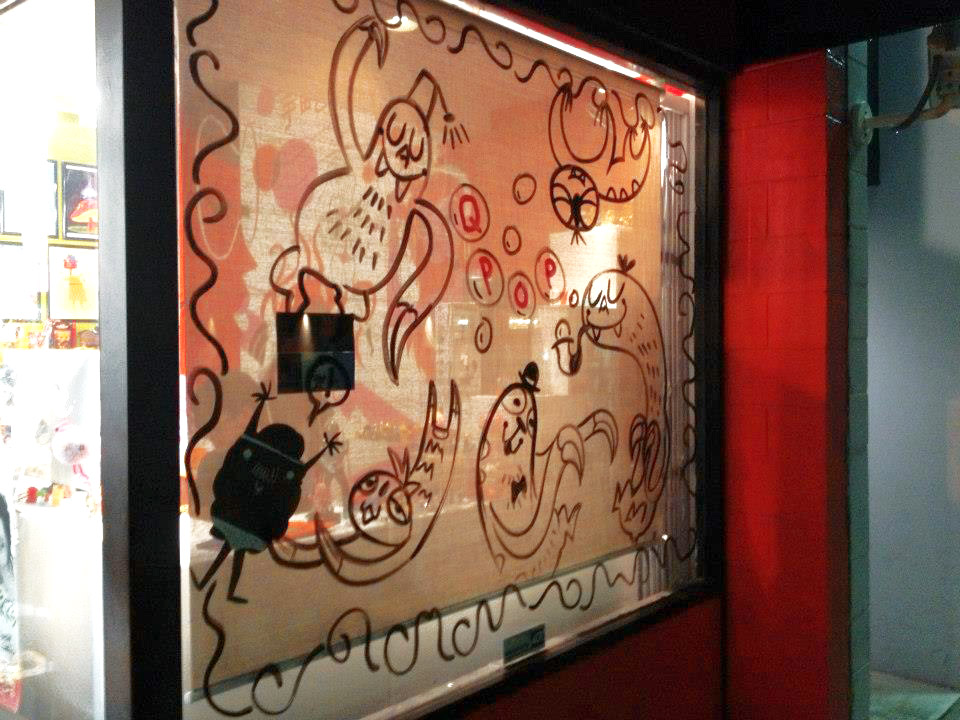 It's been a week or so since my art show and I have yet to post the after math.  I'm still waiting on the professional photos to come in so please enjoy the ones my boyfriend, Zach did for me. <3 Once I get those I'll be sure to post more about it on my other sites.

On all the days of the week, it rained pretty hard on the day of my show but it totally stopped an hour before it. So it wasn't TOO bad. I was freaking out throughout the prep time, I thought no one would show. It was just the limelight jitters getting the best of me. It felt like I was planning a wedding or something. XD

I got to draw on the windows of the shop. And no, I did not sneak a Slakoth in there. 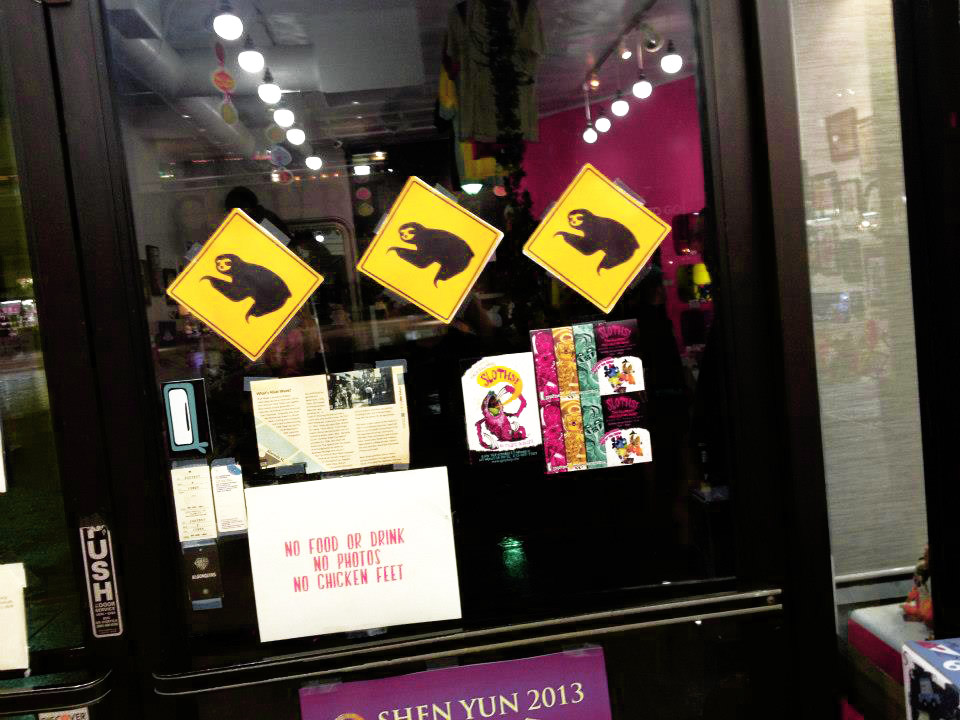 What you see when you first go through the door. You are in Sloth country now. 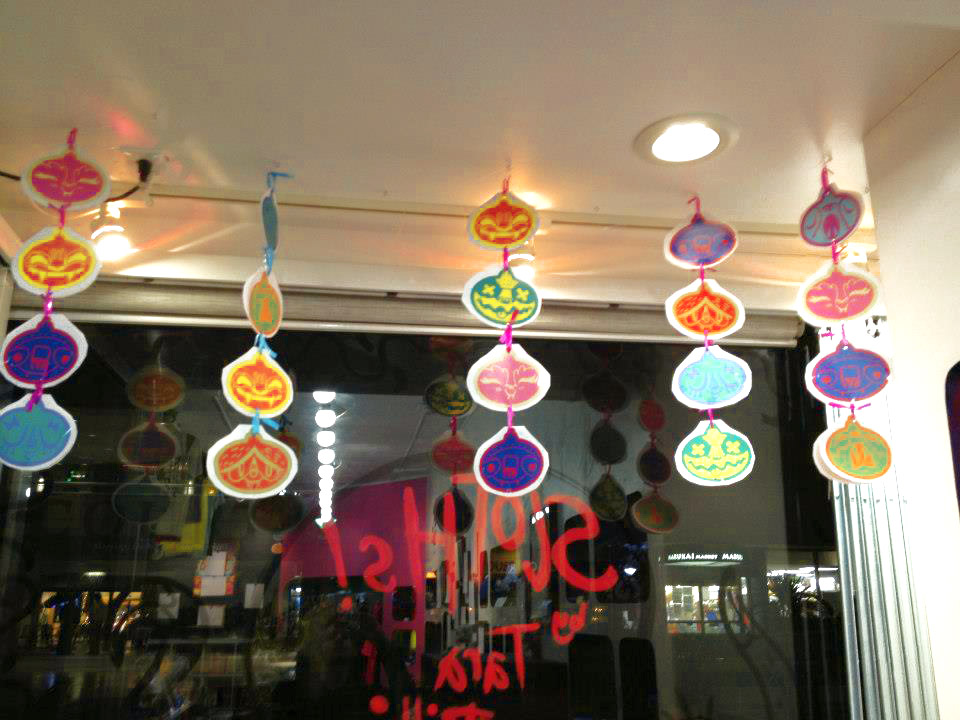 I stayed up extremely late to cut and ribbon these Sloth head streamers. :3 They made the show really colorful. 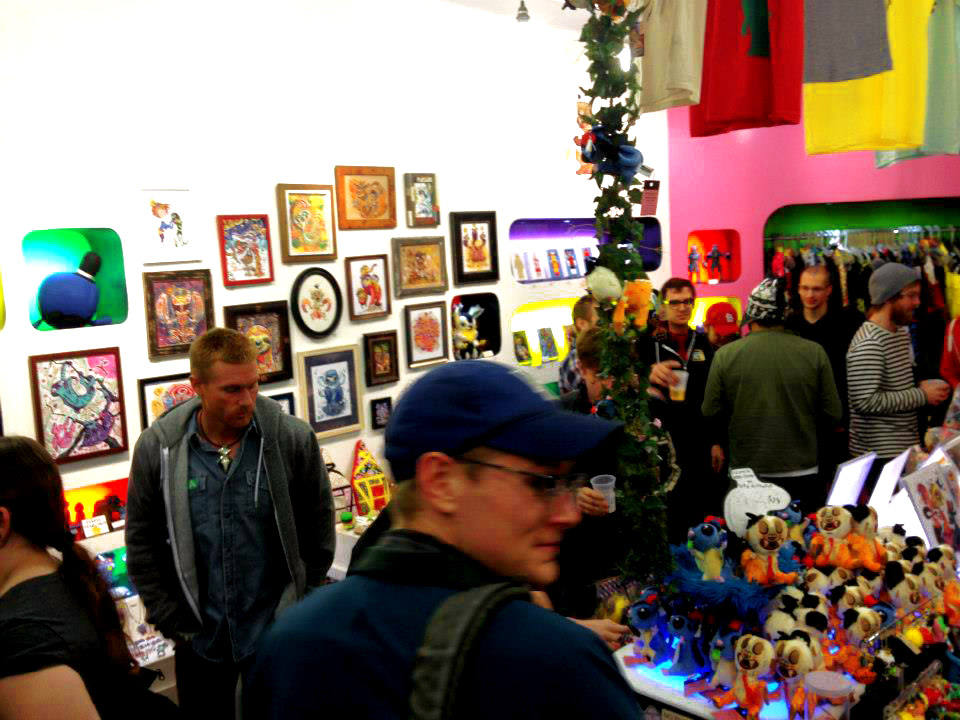 Opening night: A lot of people showed up surprisingly. I bought tons of fake vines to hang the plush on. :D 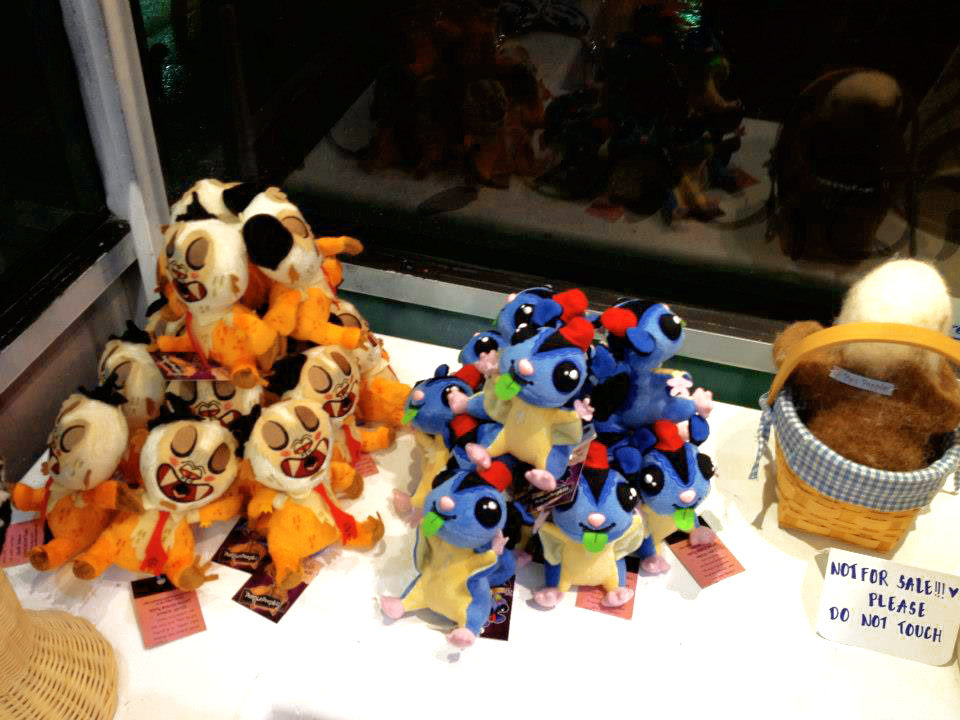 What you see inside the window. Two little plush pyramids and some Sloth plush from my own collection. 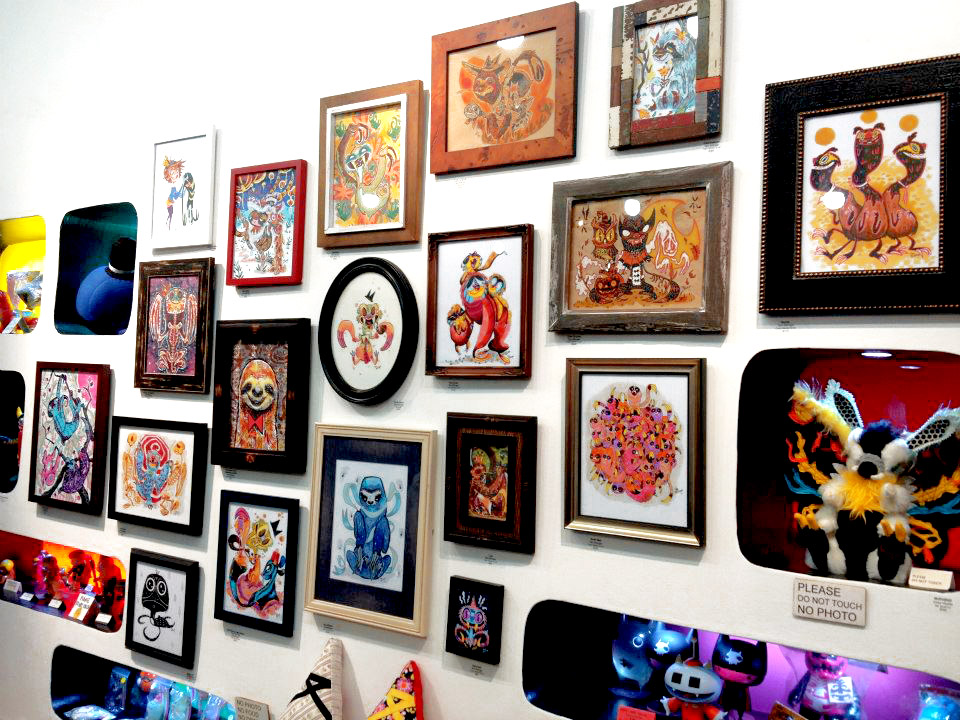 I can't believe I did it....30 traditional art pieces. All inspired by sloths. I'm pretty proud to have achieved my goal and it makes me want to do draw more. NO! I'm not sick of drawing sloths. Never. 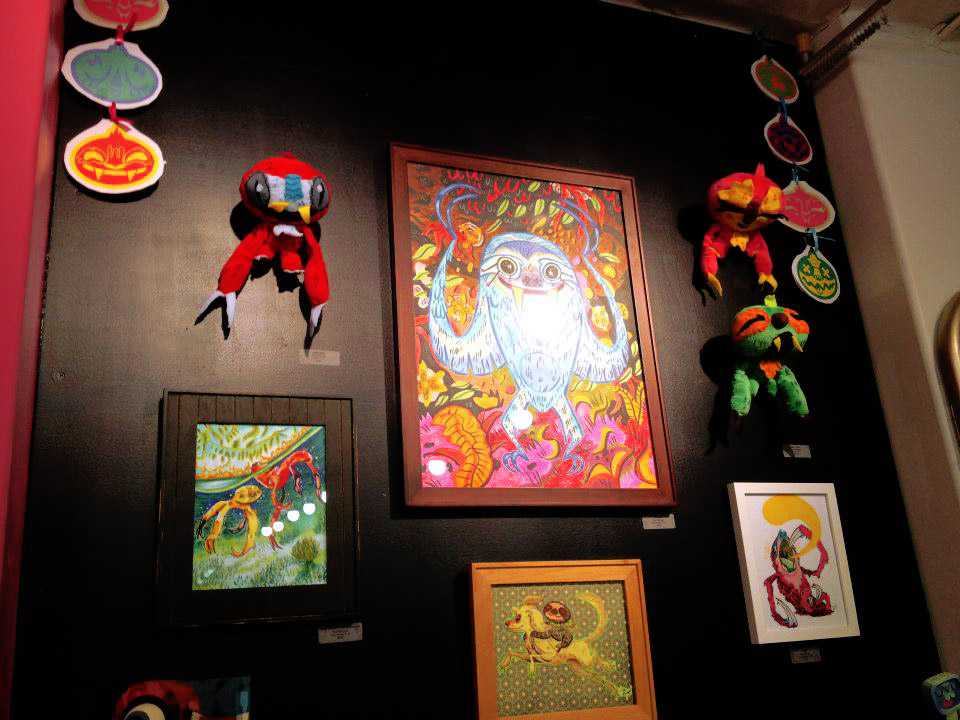 I'm crazy and decided to custom sew three plush of my own......the morning of the show.......
Also, Moki who just passed away had a tribute at the event. ;u; He used to wear my little sloth backpack. <3 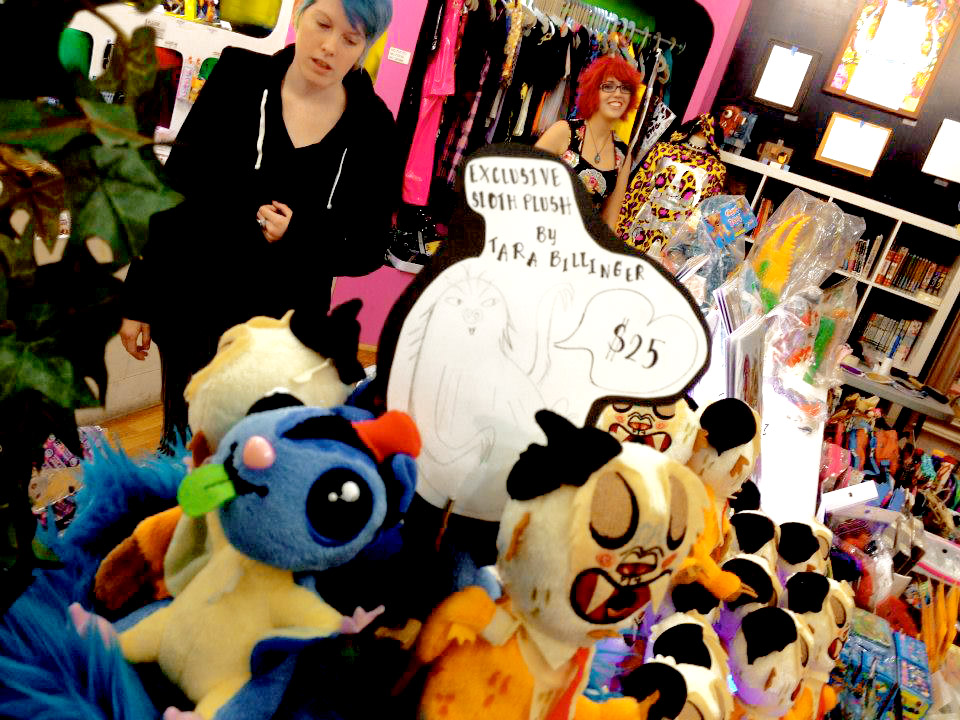 The exclusive plush debuting at the shop! 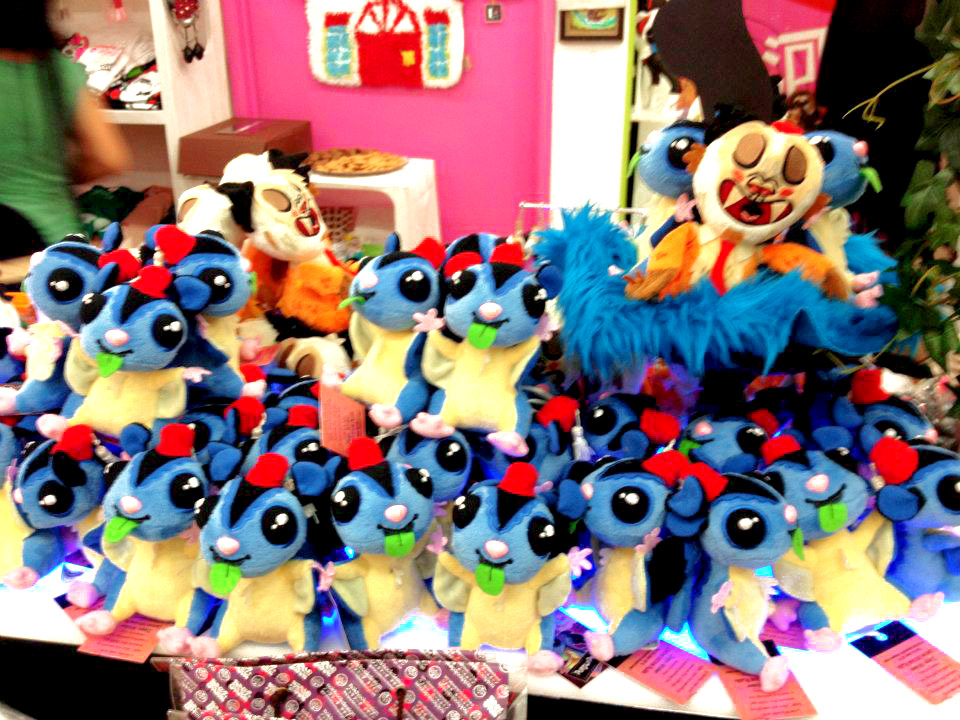 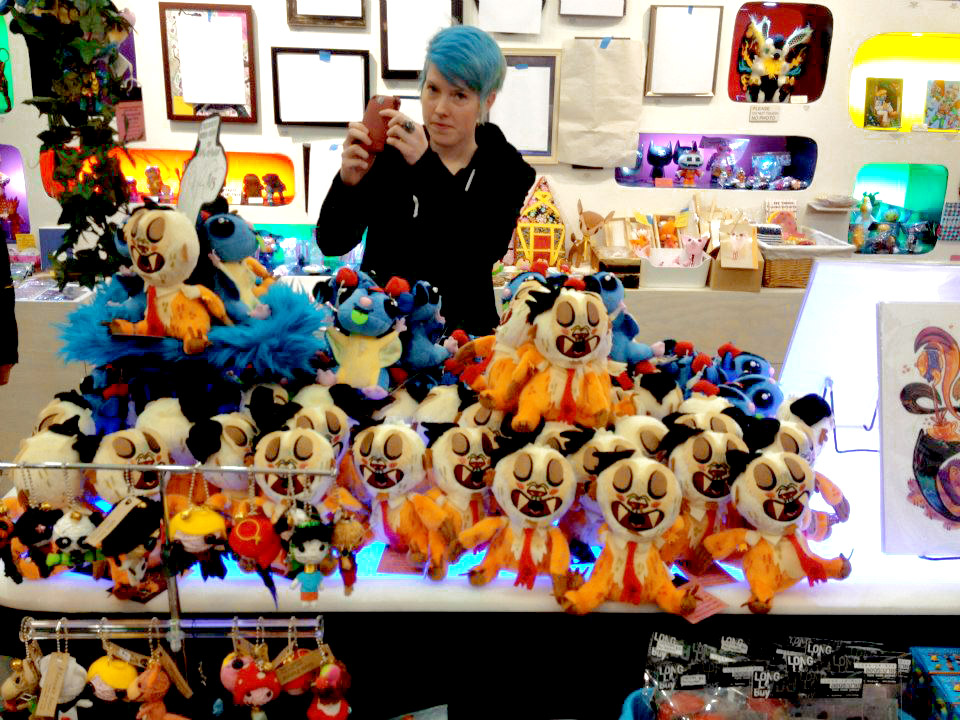 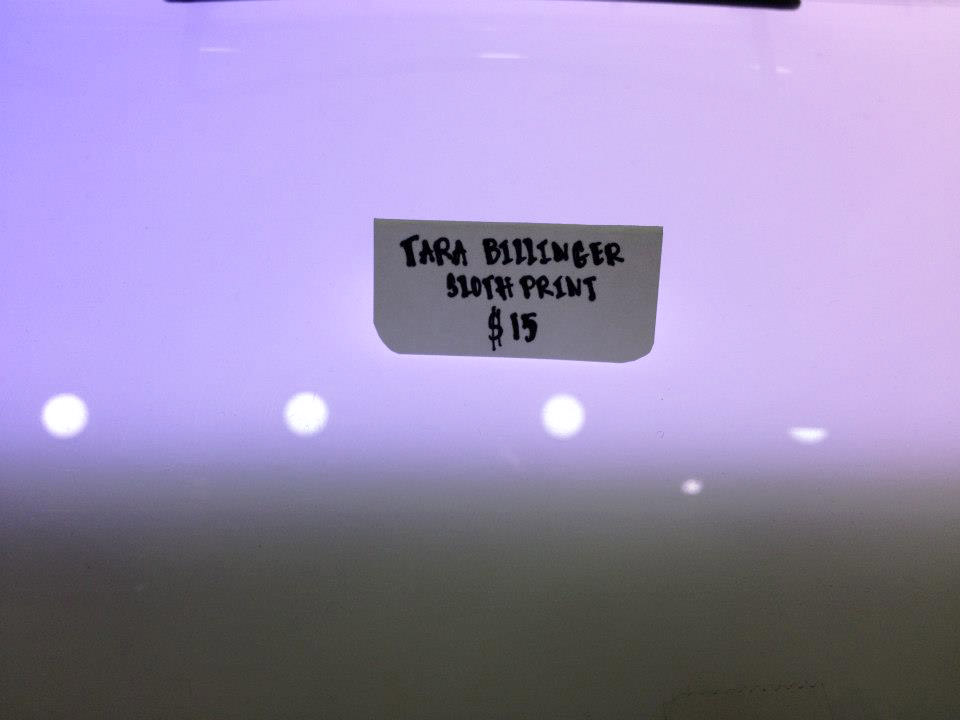 I also have five different prints available only 10 out of 10 were made. I will post the rest online if they don't sell out at the shop. 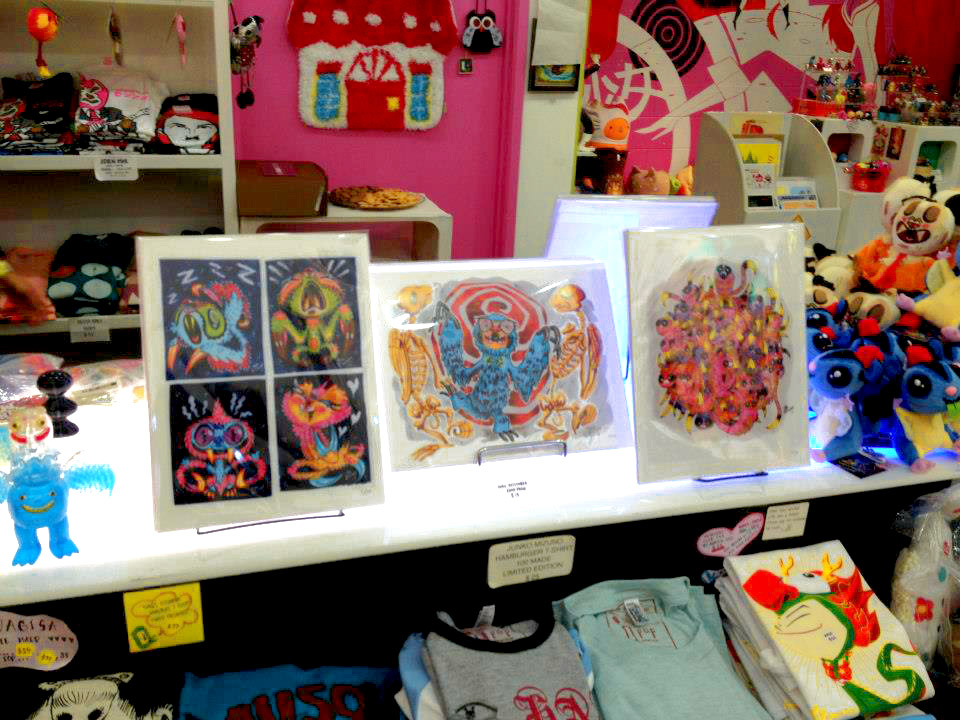 The other featured prints. 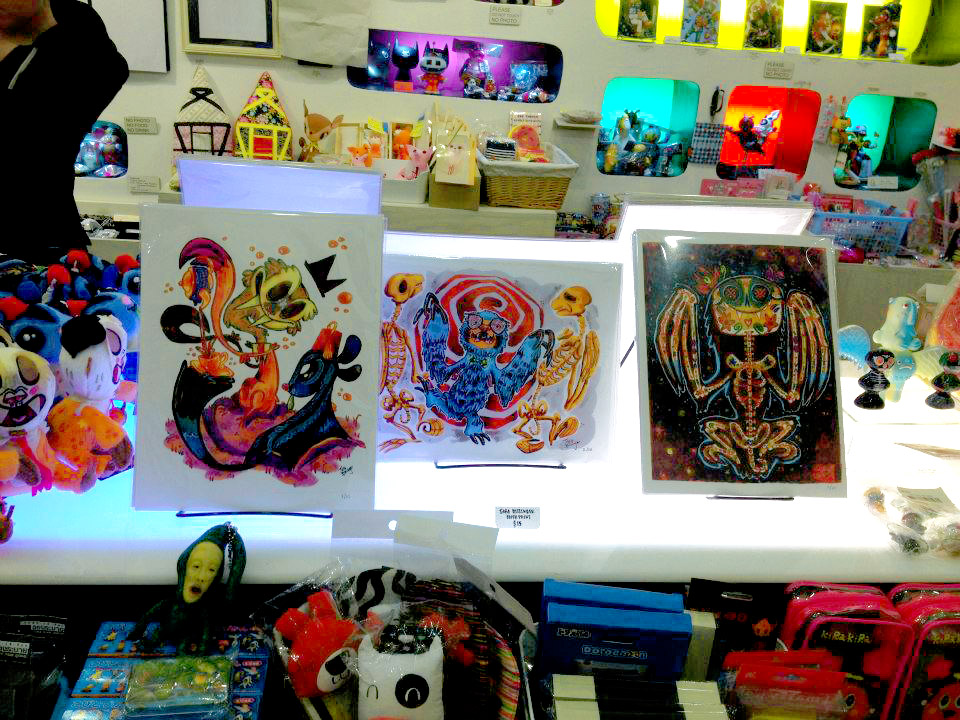 The table they were displayed on was so cool. It lit up underneath the toys and prints. It gave it such an awesome glow. 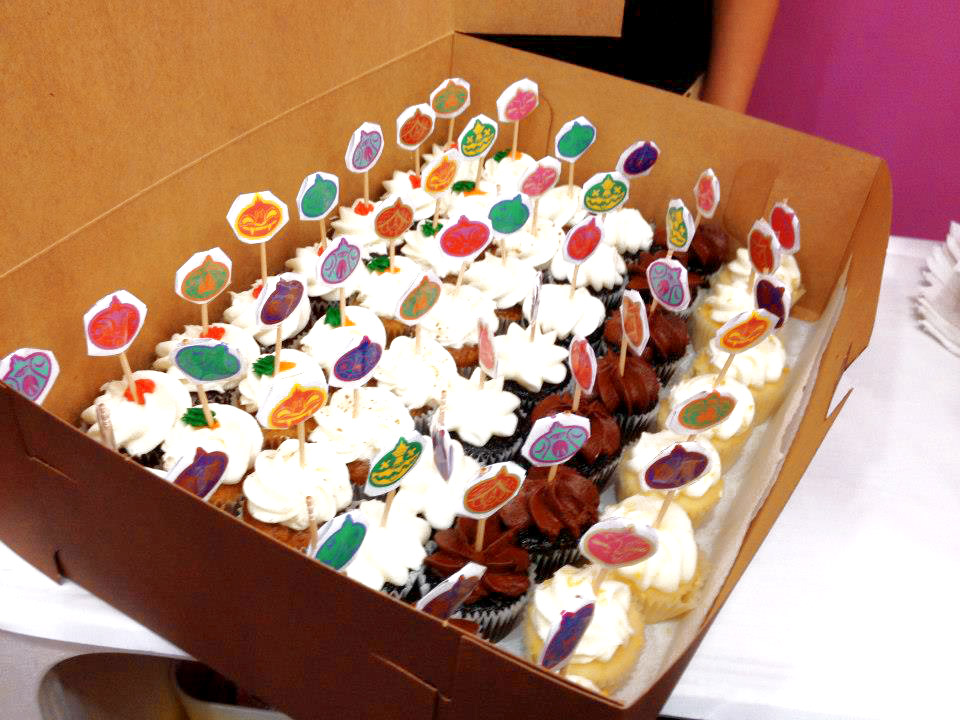 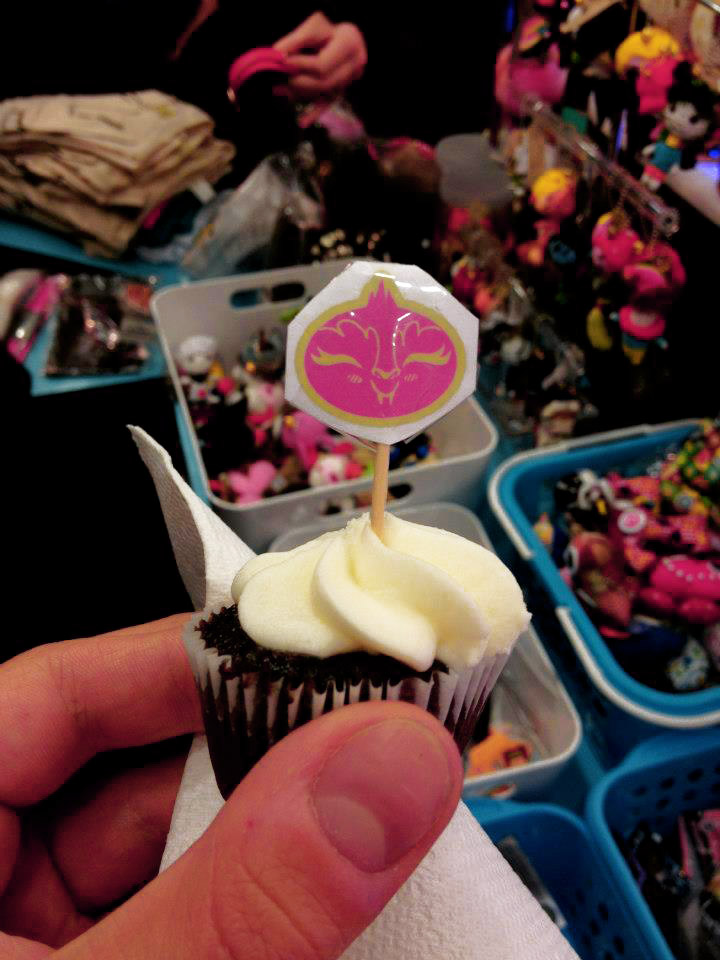 They came out great and were such a nice touch. I seen guys putting the toothpicks in their shirt pockets showcasing a little sloth peeking out. Hehe. 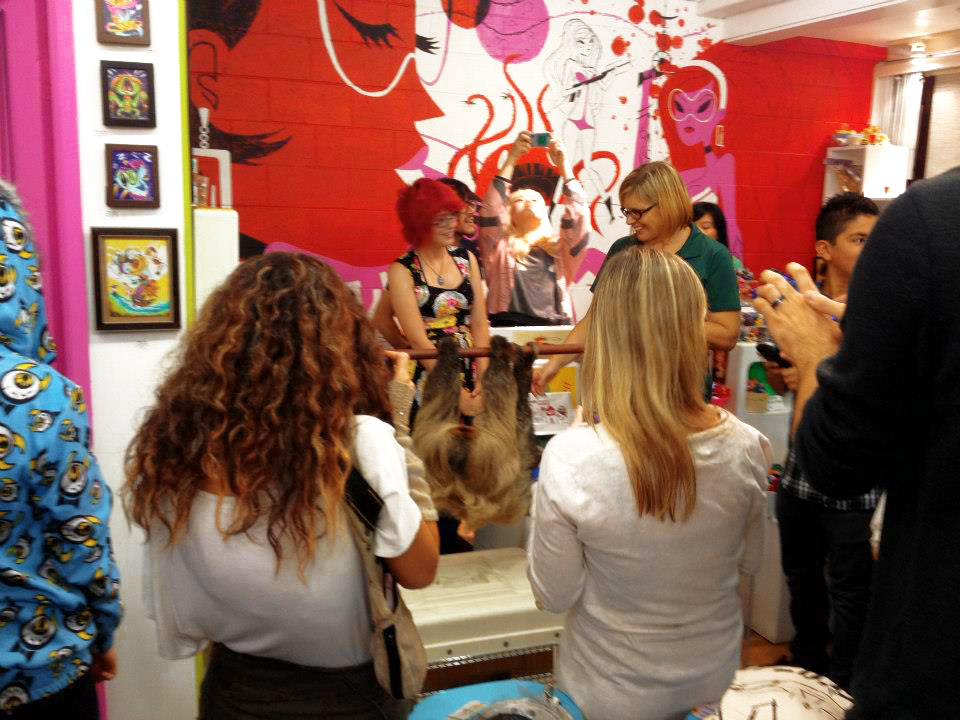 The real star was Lola! She arrived a little late due to the rain but when she got there, she was getting mauled by her fans. 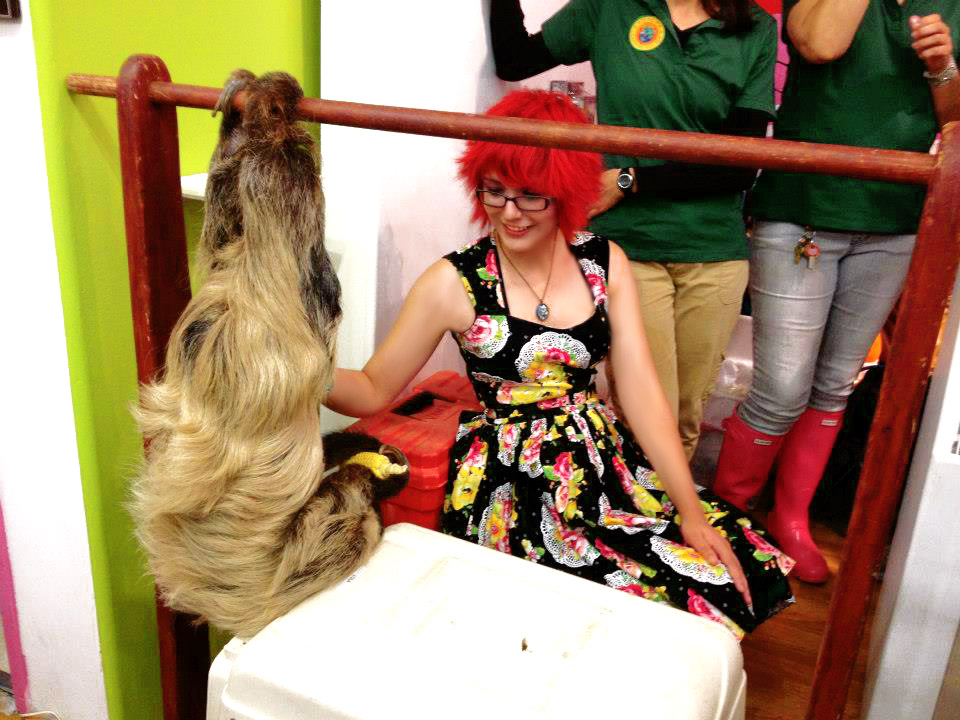 You all don't know how happy I am to have had Lola at my show. I think I spent most of my time with her than chatting with people. I got to feed her corn and bananas, give her belly and head rubs and tell everyone fun facts about her. It's a dream come true. Seriously. 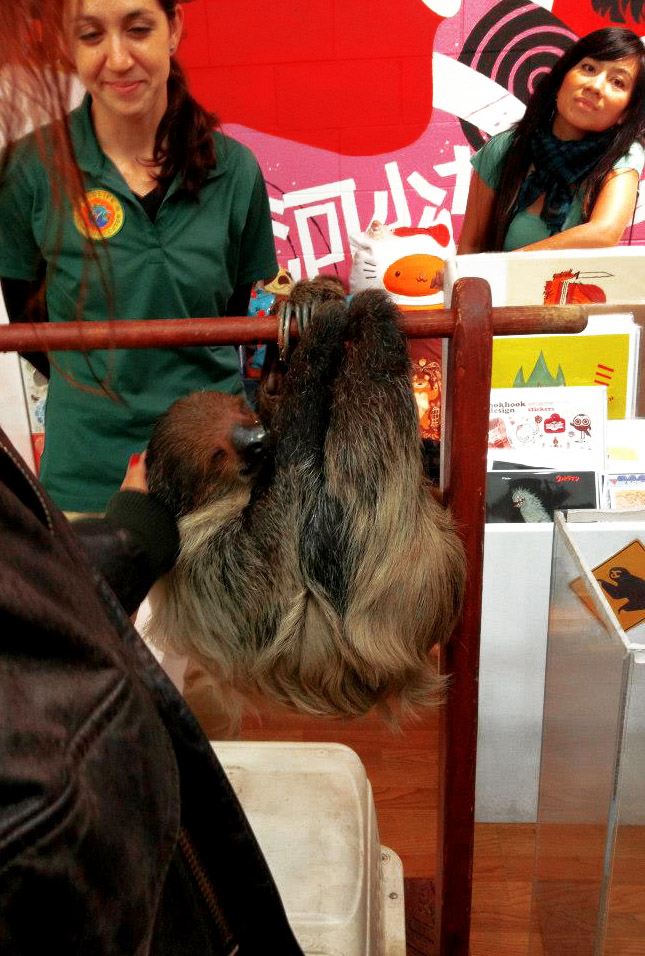 By the end of the show, Lola was getting sweepy. She really stuck it out. She was being petted and photographed for a good 4 hours. I also put out a donation box for Lola and the Wildlife center, by the end of the night we raised $200 dollars in Lola's petting money alone. ;w; I'm so happy to contribute.

I also had a band perform live inside the shop! The Manx were so great and played a couple encores too.

This whole art show was so much work. It took a good year of planning.
For about two months I was a zombie and didn't sleep much.I was whipping out one to two sloth pieces a night. I didn't realize how much time, energy frustration, paranoia and planning this could originally take. I'm still recovering from it. Haha.  I learned a lot about planning art shows, more information on selling, buying and advertising too. I've put a lot of money into this, so if you ever want to do something like this. Make sure you save up.  I'll definitely do things differently if I ever plan to do another.
For now, I will rest. *collapses*

The show is still on display but only till December 8th. Be sure to check it out!
If you would like to buy an original piece from the show they are located on the Qpop website. :3 Any purchases would be amazing and a big help. <3333

I'll eventually put up the plush for online purchase but maybe I'll wait until after the holidays, they take a lot of time to tag and ribbon. I'll update when I do!